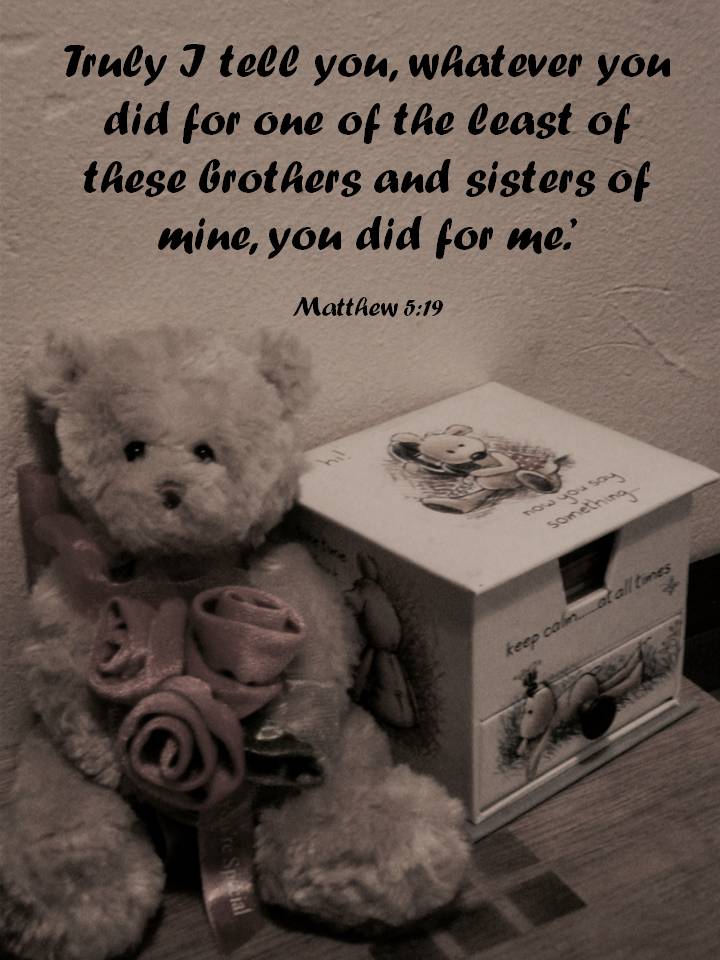 I have been pondering the line between self protection and self sacrifice this week. My dad was a generous man: it was said of him that he would give you the shirt off his back, that he was generous to a fault. He also had his own demons. These are traits that run in my family.

I brought my eldest home from the flat she was staying in this week because she had incurred the wrath of the residents who live in the flats around their communal, gated courtyard. She has a generous, loving and compassionate heart, a gift for ironic sarcasm, especially when she has had some Dutch courage, and she has more than enough of her own demons to fight. They did not like that she had invited a homeless person in through the gate to let him shower in her flat, while she washed his clothes and gave him some clean ones to wear. When he was challenged by one of the residents on leaving, he was impolite and they later rounded on my daughter like a pack of wolves. As I said, she has a gift for ironic sarcasm and did no more than add fuel to the blaze already burning.

In God of Surprises, Gerard W. Hughes writes an uncomplimentary reference for a Mr E. Manuel who has been applying for the priesthood. It it he says:

Three years ago he gave up his job and took to the road, returning occasionally with an unsavoury group of companions…a man can be judged by the friends he keeps.

Jesus, and His unsavoury group of companions; how He encourages us to turn the other cheek, to walk the extra mile. In the Spiritual Exercises, on the Three Kinds of Humilty, St. Ignatius says of the third kind:

This is the most perfect kind of humility. It consists in this. If we suppose the first and second kind attained, then whenever the praise and glory of the Divine Majesty would be equally served, in order to imitate and be in reality more like Christ our Lord, I desire and choose poverty with Christ poor, rather than riches; insults with Christ loaded with them, rather than honors; I desire to be accounted as worthless and a fool for Christ, rather than to be esteemed as wise and prudent in this world. So Christ was treated before me

In the Rules for Discernment, on the way the enemy works Ignatius also says:

The conduct of our enemy may also be compared to the tactics of a leader intent upon seizing and plundering a position he desires. A commander and leader of an army will encamp, explore the fortifications and defenses of the stronghold, and attack at the weakest point. In the same way, the enemy of our human nature investigates from every side all our virtues, theological, cardinal and moral. Where he finds the defenses of eternal salvation weakest and most deficient, there he attacks and tries to take us by storm.

And in “The Me I Want to Be”, John Ortberg comments that our signature sin is born from our greatest virtues, it is just pulled a few degrees off course. He says:

John Ortberg, The Me I Want to Be

These are the ideas swirling within me as I contemplate my daughter’s predicament, and her sensitivity to the hostility she has provoked by her actions and by her response to the hostility they provoked. It is not for me to tell her what she should do, or what she should have done. I can see where her castle wall was unprotected and I feel a deep sorrow and compassion for the suffering she experiences. I also see the grace in what moved her to act the way she did in the first place. She always shows empathy to the homeless person on the street and helps in whatever way she is able. She knows many of the homeless in the city by name, she looks them in the eye and speaks to them as friends, because she understands the saying:

There but for the grace of God go I.

There is a line between self protection and self sacrifice. I do not always know where to draw it for myself, I do not think my dad knew where to draw it either, and I believe it to be also true of my daughter. God inhabits that space. My daughter may be looking for a new place to live, and the homeless man? He apologised, and was gutted, that his impolite response to the resident who challenged him had rebounded on her. In addition, because he had been able to get cleaned up, he managed to get himself a job after leaving her flat. What else can I say, other than that I am proud of her?

How well have you loved?”

“Lord, why did you tell me to love?

I have tried, but I come back to you, frightened…

Lord, I was so peaceful at home, I was so comfortably settled.

“When men came into you,

Slipped in among them.”